The Broadwood Restoration in Photos
The instrument that started a revolution: Beethoven’s Broadwood grand, 1817. Owned by Liszt and eventually given to the Hungarian National Museum, the instrument suffered from historically inaccurate meddling until a recent restoration reversed the damage. . . . read more. 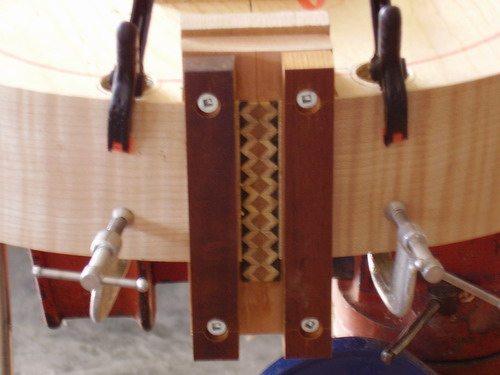 Vihuela Building part 1
Clamping sides to end-block using a fitted caul screwed to the waste portion of the block. When the neck shank is sawn through, the endblock is also sawn. In this picture the neck-block mounting block, which is mounted to the mould, serves to attach the end-block with a souple of screws in its waste portion. . . . read more. 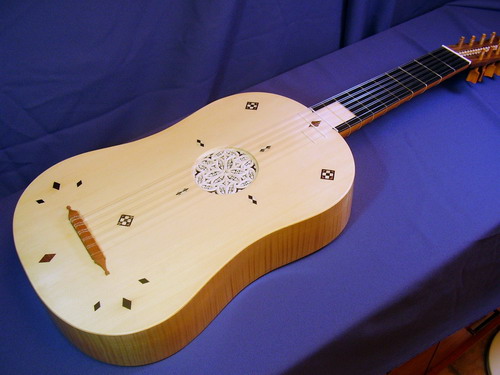 Vihuela Building part 2
There are a variety of finishes: The body is oiled and polished (not varnished) on a buffing wheel with wax; the head is polished, the fingerboard and neck are oiled, but not polished; the top is sealed with thinned shellac and waxed. The owner is instructed to maintain the finish with beeswax applied with burlap and polished with silk. If this is done regularly, the instrument will look clean and last for centuries. . . . read more.

Guitar after Panormo early 19th century, by Clive Titmuss, 1987
– used for Sonata for Guitar and Piano by Carulli and Rondo in B minor by Giuliani.

11-course lute after Martin Hofmann, 1690’s, both by Clive Titmuss

13-course lute after Duiffopruchar 1600’s, renovated by Edlinger middle 18th century, by Robert Lundberg 1978
– used for Prelude and Capriccio, Suonata in D minor by Weiss and Tombeau for Glenn Gould by Titmuss

14-course theorbo-lute after M. Hofmann 1690’s by Clive Titmuss, 1996
– used for Prelude, Fugue and Allegro by Bach, Partie in A major by Falkenhagen and Sonata in G major by Straube

Harpsichord after an anonymous Italian model 1694, by Johannes Secker 1983 – used for Lamentation for King Ferdinand III, Suite in C minor by Froberger, Sonatas in A major and C major by Scarlatti, Prelude and Fugue in A minor by J.S. Bach, O Mistris Myne by Byrd, Sonata by Arne.

Square piano by John Broadwood, London c. 1815, heard solo in the Hadyn Sonata in D, and with period guitar in the Giuliani Rondo and Carulli sonata

THE TITMUSS PAPERS: compiled and edited by Maurice Titmuss